TendedBar automated bartending machine makes it easier than ever to get the perfect cocktail after a long day on the trade show floor.

In case you hadn’t noticed, there’s a lot of alcohol consumed after AV trade shows close up shop for the night. And, as you might imagine, these thirsty AV trade show and conference attendees have come up with a better way to make sure they don’t have to wait to enjoy the perfect cocktail after a long day on the floor. It’s called TendedBar, an automated bartending machine with a touchscreen.

TendedBar is targeted at high-volume venue[s], with the promise of providing ‘better drinks, faster’ through the use of 22-inch Android touchscreens from Elo.

The machine quickly pours cocktails, beer and wine with the ease and intuitive use of a self-service touchscreen, according to an Elo announcement.

At an August event at VyStar Veterans Memorial Arena, the line to interact with TendedBar was never longer than three minutes, with an average order to drink time less than 30 seconds, the announcement says. That could mean those free drink tickets run out a lot faster. 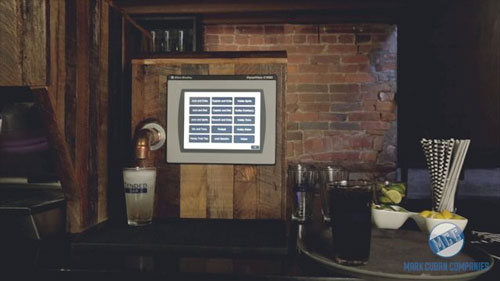 I already know I have trouble keeping up with a lot of my fellow AV trade show and conference attendees when it comes to the post-show celebrations. Maybe it’s because I mostly drink Cuba Libres and a lot of them tend to focus on beer, but it’s probably just because I’m a lot more out of practice when it comes to consuming alcohol.

If the main obstacle of waiting in line for a while is no longer an obstacle thanks to TendedBar, imagine how much further behind I’ll fall.

It might be similar to my performance in the 2012 hot dog-eating contest qualifier in Boston, where I downed seven hot dogs in 10 minutes, only 35 hot dogs and buns behind eventual winner Matt Stonie, who earned the mustard yellow belt on July 4 a few years later.